An American Kestrel wild caught female in fine condition is being displayed by ornithologist Chris at Wildlife Research Institute. January 2010.

Some facts and figures: American Kestrel is our smallest and most colorful falcon. Formerly known as "sparrow hawks" because of their size, not their choice of prey, Kestrels are sexually dichromatic. The male has blue-gray wings and a rufous tail with a single broad subterminal black band, while the wings and tail of the female are rufous with black bars across their lengths. Kestrels also exhibits sexual size dimorphism, with the female about 10% heavier than the male.

Kestrels have an amazing ability to "hover hunt" for prey. They face into the wind, alternately flap and glide their wings and balance with their tails. Trying finding your dinner on the wing ! 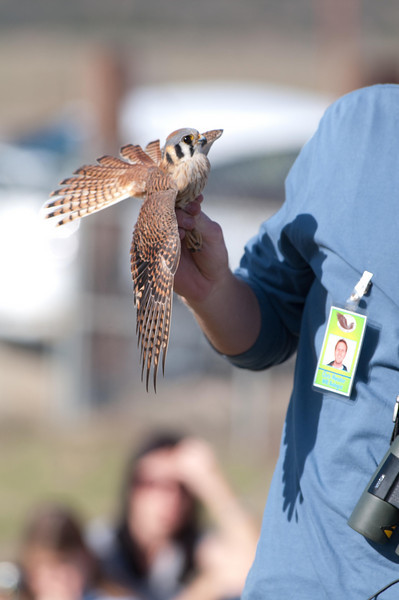